After WWII Fordson decided that a new tractor should be designed so the E27N Fordson Major was created. This would be available in a variety of models including a diesel version. It would be sturdier than older models and come with an improved and efficient final drive system to eradicate the problems with the older range. Produced in Dagenham the 'Major' would have either a 28hp, 1100rpm, 4 cylinder mixed fuel engine, or the 45hp Perkins diesel engine.

By 1951 the E27N was starting to show its age and was losing popularity over the Ferguson TE tractor so Fordson went on to replace the E27N with a newer model, the E1A Fordson Major. The 'Major' was a popular tractor due to its powerful ability which turned it into a respected, strong and reliable workhorse for farmers. There were originally three types of fuelled engine, gasoline, diesel and kerosene, with diesel being the most popular and the kerosene version being dropped. When introduced, the diesel tractor produced 40 hp, this was raised to 44hp, then 48hp with the introduction of the Fordson Power Major in 1958. The Fordson Super Major was introduced in 1961.

The Fordson Dexta was launched in 1958 to compete against the popular Massey Ferguson MF35 tractor. With its 3-cylinder diesel Perkins engine, the Dexta is the sort of tractor that worked well in smaller farmer operations. Produced from 1957-1961 at Dagenham, the Dexta proved to be a popular choice so Fordson continued to develop the machine and created the Super Dexta (1962-1964), (also known as the Ford 2000 in the USA), with its upgraded Perkins F3.152 engine.

You can view our full range of Fordson tractor parts or filter your search by selecting a model below:

Henry Ford was born on 30th July 1863 in Springwells Township, Michigan. He grew up on a prosperous family farm so he was well placed to know the value of a hard day's work, young Henry Ford certainly experienced first-hand just how arduous farming could be. In 1888 in married Clara Bryant, also a farmer's daughter, they initially settled on 80 acres of farmland given to them by Henry's father William Ford. However, from an early age Henry was more intrigued by how things work than by farming the land so they decided to move to Detroit in 1891 where Henry could chase his automotive interests.

As an engineer inventor and businessman Henry never forgot his farming background as he remained committed to lessening the farmers burden using new engineering techniques. As he later wrote in his autobiography "to lift farm drudgery off flesh and blood and lay it on steel and motors has been my most constant ambition".

In fact before Henry would even begin to think about automobiles he first thought about tractors so after the Ford Motor Company was founded in 1903 Ford built his first experimental tractor from automobile components which was called the automobile plow. In 1910 further experimentation followed when Henry applied for several patents on the tractor. By 1916 Henry's son, Edsel Ford, was active in the family business and he joined his parents on the board of a newly formed company. 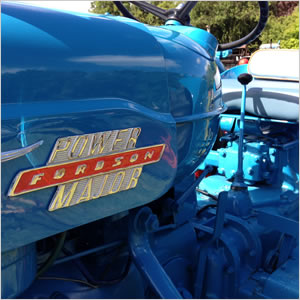 World War one was now underway in Europe and food was desperately needed to feed thousands of troops. Henry and Edsel wanted to provide some relief to the farms that had sent there men off to the war so in 1917, (over a 100 years ago), they created the first massed produced Fordson tractor. It would transform worldwide farming by making it possible for farmers to harvest more land in less time and using less labour.

The Fordson wasn't the first tractor to market but it was lightweight, manageable and priced within reach of the average family farmer. It captured the public's imagination and widely popularized the machine, with a reliable design, a low price affordable for workers and farmers, a widespread dealership network, and a production capacity for large numbers, it is an overstatement to say that the Fordson was to farming what the Model T was to personal transportation.

When Henry Ford looked to expand his operation he had only one location in mind for his first plant outside of North America and that was County Cork in Ireland. This was the birthplace of his father and home to his ancestors going back to the 16th century. Machinery production in Ireland was almost immediately side-lined after air raids hit London, so the factory turned to producing essential airplane parts so tractors would have to be only built in the USA but was resumed in 1919. Fordsons rolled off the line there until the 1930s when tractor production moved to England. The Cork plant then focused on car and truck production until its closure in 1984.

Tractors continued to be made under the Fordson brand and were considered to be totally separate from the automobile operation until the early 1960's when it was decided to integrate the two operations so after 1964, the Fordson name was dropped and all Ford tractors were simply badged as Fords in both the UK and the US.

Tractor parts described as suitable for original manufacturers on this site are Sparex branded tractor replacement parts and are not manufactured by the Original Equipment Manufacturer (OEM). Original Manufacturer’s names, part numbers and descriptions are quoted for reference purposes only and are not intended to indicate or suggest that our replacement parts are made by the OEM.
Copyright 2020 Malpas Tractors Ltd, Curvica Ltd.
Malpas Tractors Ltd is a company registered in England & Wales with number 2057260